A few months ago I joined Amazon Prime, so for $75 it give me free 2 day shipping on most items.  The thing that amazes me the most is how much that it has increased my spending on Amazon- or conversely how much it has shifted me from buying stuff from brick and mortar stores.  It is cutting probably almost half of my purchases from Home Improvement stores, drugstores, etc.  It is so much more efficient than driving  to the store, finding the item in the store (or having to go to a different store) and then getting home and realizing I forgot something..

This article got me wondering further about where all the worlds low skilled labor would make a living in the coming years:

And back to Amazon for a moment – even they are working to automate as much as possible:

I realize that for hundreds of years people have had this worry about technological advancements, but I am hard pressed to think of a low skilled job sector that is not faced with competition from automation.   So for young, low skilled, or under educated people, where do they get their start?  I have to think retail jobs and even warehouse jobs are or will be on the decline,  and for low skilled manufacturing you are competing with the rest of the world.

Here is a chart I put together from data from the Bureau of Labor Statistics of historical unemployment by age group: 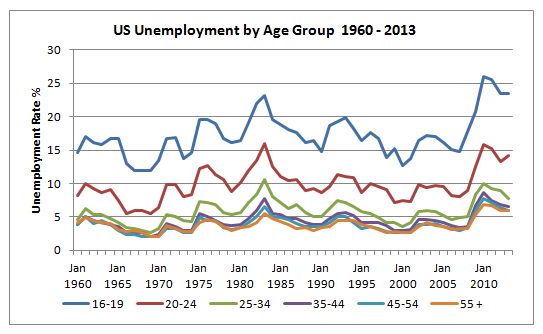 So maybe we are in the early stagest of an economic evolution – or revolution.  It will be interesting to watch Spain and the rest of the eurozone deal with this unemployment problem, because we will likely be dealing with the same problems soon.

One thought on “The Future of Unemployment”