I have been banging the drum about economic stimulus, both domestic and in Japan for awhile now. A great article summing up the current state of affairs in Japan appeared here:

I downloaded the bloomberg.com PDF which is referenced in the article and skimming it found some interesting tidbits. Here are a couple of the most interesting charts: 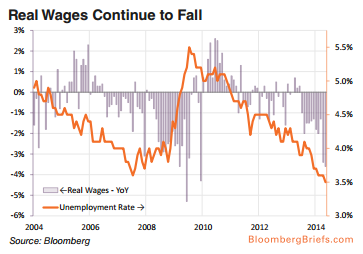 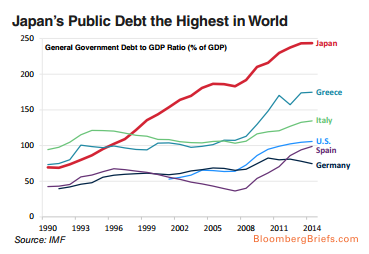 Unemployment is falling, but real wages are also falling.  Public debt is huge – way off the scale for a developed country.

In the Bloomberg PDF I found this response to what the endgame is for economic stimulus, i.e. how to get out of inflating the economy and wind down the huge public debt (highlighting is mine). 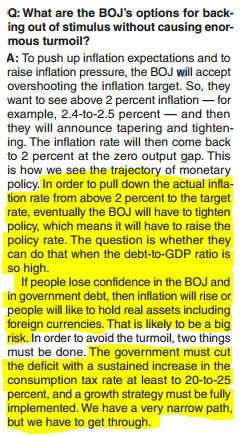 Sounds like its going to be a minefield to try to stop quantitative easing without driving up interest rates.  If interest rates rise, then the huge debt accumulated becomes much more expensive, perhaps impossible, for the government to service.  It will require the goverment to walk ‘a very narrow path’ to try to get it done.  Based on the success of the governments managing the tech bubble of the early 2000’s, and the housing bubble of 2007, I am not too confident they can orchestrate a soft landing.

I also ran across a comment from Janet Yellen, the Fed chair, regarding the economic stimulus in the US.  From a fed speech on July 2, 2014 (again , highlighting mine):

In my remarks, I will argue that monetary policy faces significant limitations as a tool to promote financial stability: Its effects on financial vulnerabilities, such as excessive leverage and maturity transformation, are not well understood and are less direct than a regulatory or supervisory approach; in addition, efforts to promote financial stability through adjustments in interest rates would increase the volatility of inflation and employment. As a result, I believe a macroprudential approach to supervision and regulation needs to play the primary role. Such an approach should focus on “through the cycle” standards that increase the resilience of the financial system to adverse shocks and on efforts to ensure that the regulatory umbrella will cover previously uncovered systemically important institutions and activities. These efforts should be complemented by the use of countercyclical macroprudential tools, a few of which I will describe. But experience with such tools remains limited, and we have much to learn to use these measures effectively.

Yikes!  I am not wild about seeing ‘not well understood’ and ‘we have much to learn’ in the same paragraph.  Hopefully the US can learn from Japan as they are farther down the road than the US.  But Japan has no such luck, so they could be in for a rough road ahead.