Over the past weeks as I read the predictions for 2015, I have been mulling different points of view about where interest rates are headed in 2015.  I think I have made up my mind that interest rates will be heading lower in 2015.

This chart as highlighted in this Business Insider article is rather telling: Looking at this chart, the yield on the 10 year US Bond (the white line) appears out of line with the other primary developed countries. If you believe the US economy will stay the course in 2015, in comparison to its foreign peers, you would expect the US yield to be closer to the others.  Interestingly, given Japan’s debt problems, the Japanese debt also appears to be mispriced;  .03% seems awfully low for a country with the highest debt load of any country – investors in Japanese bonds seem confident that they will get all of their money back in 10 years. I would not be that confident.

So how low will interest rates go?  After all, they are almost at 0% now.  Well, we are in historic economic times – and negative interest rates are spreading.  Look at this price chart of German Bund interest rates: 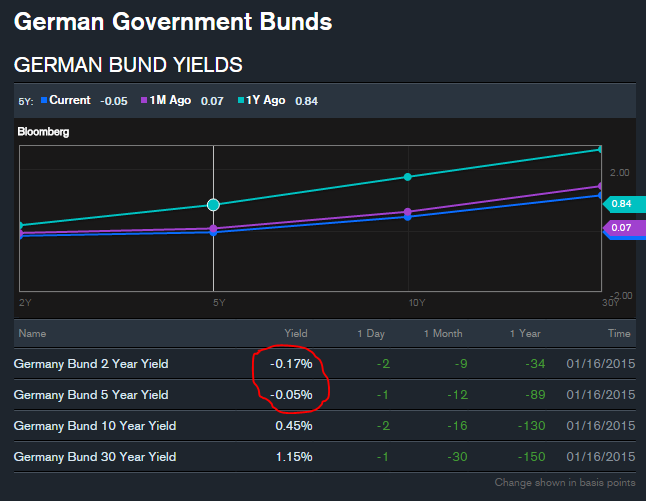 The Swiss Bond Index is also negative, so its not inconceivable that US Bond yields could go negative this year.  So conventional wisdom was rates have nowhere to go up – but this shows how we are in very unconventional times and it may be time for unconventional thinking.