Call me crazy, but tell me if you have heard this story before.  A huge tech company under a visionary leadership has a market dominating product and rakes in tons of money.  The visionary leader then leaves the company, handing it off to a hand picked successor who’s job it is to continue the winning tradition.  After several years, the new leader just focuses on monetizing the cash cow that is the market dominating product, and fails to innovate leading to a stagnation of the company.

Perhaps its too early to be ripping Tim Cook- the CEO of Apple, but I am starting to sense a similarity to the Steve Jobs –> Tim Cook story that played out as the Bill Gates –> Steve Ballmer story.   Is the I-Phone Tim Cook’s equivalent to Windows?

Apple’s earnings this quarter was a disappointment for investors, sending the stock own over 5% after the release.  Apple is still shipping tons of iPhones –  47.5 million units for the quarter (!) vs an anticipated 48.8 million.  But the disappointing iPhone numbers aren’t what got me thinking -its the innovation.

Apples new product launches have been rough.  The Apple Watch launch was botched – and the product itself was not terribly innovative compared to other Android and other wearables out there.   Then, the Apple Music launch was also botched – and the Apple music product is not a significant improvement over other streaming services such as Spotify or Pandora.  The Apple Pay launch was done better, so not all is going wrong, but Apple is held to a higher standard than other companies.

Perhaps investors have started to take notice.  Apple stock has had a huge run in the last several years, but looking at chart since the start of the 2nd quarter of 2015 – Apple is losing ground to the other big-tech companies: 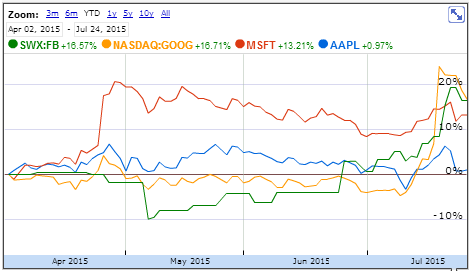 So call me jaded – but as a former Microsoft investor who saw Microsoft skyrocket in the 90’s and then stagnate for 10+ years under Steve Ballmer’s leadership, I think I am going to watch Apple from the sidelines until I see signs of the  old Apple Magic.