I have been watching Gold lately as an asset class – Gold has always been a curiosity of mine as to why people would invest in gold.  Over the last few years as I have been watching how momentum impacts markets, I feel I understand a little better about the hows and whys of how gold prices move. 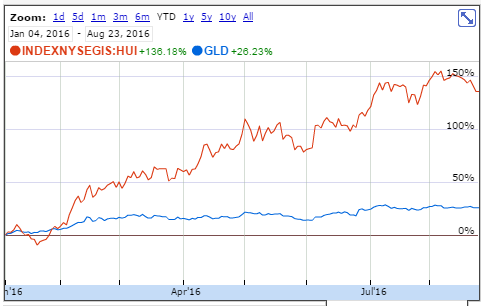 So you might think you are an idiot for not investing in gold this year – except if you thought that 5 years ago, people would call you an idiot because gold had been steadily declining for the last 5 years: 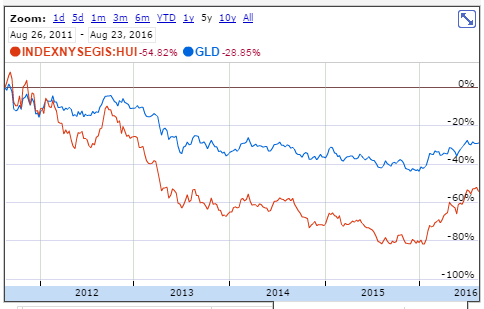 Obviously Gold is a tricky investment, and lots of people stay are recommended to stay away from it.  However, it seems that as interest rates approach zero – people are wondering the downside of holding gold?  I think there is an increase in people’s nervousness that with all this sovereign debt floating about the world, some event will explode on the scene and inflation will kick in.  If that happens, bonds yielding 1% is not the place to be.

The argument against gold would be a deflationary scenario – in which prices fall – gold will follow.  Apparently markets don’t see that as a significant risk.

Jim Grant, who has consistently been a gold bull, and points to worldwide monetary shenanigans as the reason for golds new found popularity.

In a recent radio interview, former Fed chief Alan Greenspan suggested if we returned to the Gold Standard, ‘we’d be fine’.  Returning to the gold standard has long been talked about as a kooky idea by economists, and it may well be an antiquated idea.

However, something is driving the new found interest in gold, and I think the worldwide decoupling of printed money from government assets is leading the world to wonder about the value of currency.  So whether or not a formal move to the gold standard ever gets momentum, it appears investors are wanting their assets backed by tangible goods.

It’s been awhile since I have had a US foreign policy rant, so I figured it was probably time.  While the US populace has been distracted by the US Election Show, the administration took the opportunity to expand our militaristic role in the Middle East.

The US started bombing ISIS in Libya last week, apparently because our litany of bombing other countries has been so successful – or perhaps we are running out of targets in those countries.  This time there is a twist, as we are bombing targets at behest of the interim government – so we are acting as hired guns to officially do the worlds dirty work.

Why is this story so under-reported?   Are Americans numb to the mess that is American Middle East foreign policy?  According to Pentagon spokesman Peter Cook, the strikes did not have “an end point at this particular moment in time”.

So this is a new front against the ever expanding battle against ISIS.  And there is no end in sight.  And don’t look for anything to change under a new Democratic or Republican administration.

But wait a minute – I have to cut this post short – Donald Trump just tweeted something that has all the news networks giving him 7×24 coverage… so I gotta go and watch whats really important.