I typically have been a bottom up investor- look for companies I think are undervalued, and invest in the hope that others will see the bargain out there and raise the price.  This is called ‘Bottom up Investing‘, focusing on the individual market vs the stock sector or the asset class.

However, the market action of the last month has shaken my belief that bottom up investing is rational.   Since the Presidential Election, stocks in the Financial and Industrial sectors have taken off, on really no fundamental news.  For example, take a look at Columbia Banking (COLB)  and the Vanguard Financial ETF (VFS) over the last 3 months:

No news, no management changes, just a lot of stock being pumped into the financial sector because of the new administration.

Here is another example, FLIR Systems (FLIR) systems, in the industials sector, compared to the Vanguard Industrials ETF (VIS): 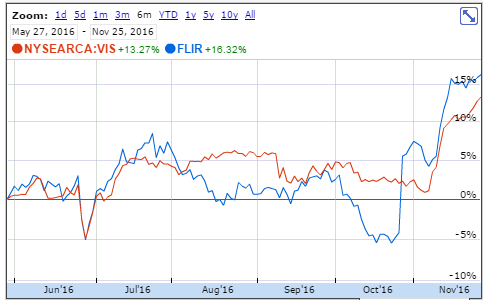 Again, no news, just happens to be in a sector where money managers are moving money too.  FLIR Systems has a number of industrial products centered around imaging and surveillance cameras – I hope this doesn’t reflect a belief that this administration is going to ramp up spending on domestic surveillance, but this isn’t a positive sign.

And what caused this huge shift in sector allocation?  My best guess is Trumps leaning towards rebuilding infrastructure and piling up bigger government debts.  That’s a lot of money moving around based on an administration whose policies are murky at best.

So, should I abandon bottom up investing and switch to top down investing?  No.  I won’t abandon it – I cling to the belief that undervalued companies will be recognized eventually.  However, I do think I need to increase my focus on watching asset class and sector indicators.  It does appear in this world where so much money is managed by a small pool of investors, there is is something to watching what the so called ‘smart money’ finds attractive.

A while back, I saw a tweet from Elon Musk recommending the reading of the book ‘The Machine Stopped’, and was curious as I thought I was somewhat up on historical science fiction.  You can access a public domain copy of the book here:

Considering this book was written in 1909, the vision of the future by the author is pretty good.  Television, public air travel, the internet(?) all pretty well envisioned.  This is definitely worth a quick skim.

As an avid reader of history, and a follower of the US political scene –  I have to rank last nights election of Donald Trump to the presidency as one of the most astonishing national events that I have witnessed.  Much will be written in the next days/months/years/decades about how this came about, so I may not have any unique insight, but I thought it would be worth recording my initial impression.

The fact that the winning candidate himself was so flawed is perhaps not the biggest political wonder.  Not to mention a popular incumbent Democrat, a 4.9% unemployment rate, and little inflation.  A Republican party which in large part refused to endorse their candidate, waiting for him to go away, is now running the show.  This defies all conventional thinking.  This also results in the huge power vacuum that was in the Republican party to make its way to the White House.  Nobody knows what to expect or who the power players will ultimately be – for that matter nobody really knows what Donald Trump stands for.  The Democratic opposition is temporarily shattered, decapitated overnight.  Trump’s policy predictions were necessarily incoherent to get him elected.  Nobody even knows if he wants the job of President.

Long term, the big takeaway from me is how nationalism is gaining momentum in the US and in most developed economies.  I think people did not vote for Donald Trump, they voted against the status quo and the elites, a vote driven by the growing wealth inequality.  Call it the ‘revenge of the flyover states’ – but the booming high tech wages and increasingly large Wall street profits caused this as much as any of the politicians messages.

This proves Brexit was not an anomaly – too me this election has the same signature as the Brexit – the middle class taking control and voting for change regardless of what the power elite recommend.  I would expect more nationalist and rightwing votes to happen in Europe, and possibly Japan.  Should this trend continue, I have little optimism for the world economy and the hope of world peace.

After writing this post, but before publishing it,  I ran across Glenn Greenwald’s post also supporting this theory.  It’s a great read to help try to make sense of this.

Shorter term, I look for a recession within the next year.  Nothing to do with whatever policies might arise out of the new administration, more due to the massive uncertainty in the next few months.  This has to put a lot of capital spending (across the world) on hold as corporations wait and see who fills the power vacuum.  Early reports are the widely expected December rate hike is off the table- if so, that shows the Fed is already going on the defensive.  I can’t see how this will not slow the the world economy.

The Obama administration came in on the slogan of ‘Hope and Change’, and in some ways he delivered on the promise.  Now perhaps the slogan should be changed to ‘Fear and Hope’,  as we perhaps need to fear the anger demonstrated by the middle class with this vote, and hope that this administration can surprise us and help build a better world.