Awhile ago a wrote a post regarding whether or not RSI looked like a meaningful indicator. After writing that,  I decided to do an experiment to see if I could come up with a strategy based on the relative strength index (RSI) of a stock.

First off, there are many ways to calculate RSI – short term, long term mid term, but I decided to look at the short term 10 day moving average RSI – for now particular reason other than I had that data available.  The strategy I used was when a stock goes above 70 on the RSI sell a call or buy a put with the assumption that it is likely to perform poorly going forward, and when the RSI falls below 30 buy a call assuming it will outperform the market going forward.

I set up a process that each week, my stock model sends me an email with candidate stocks where the RSI is above 70 or below 30, and I would pick from that list likely candidates and record it in a spreadsheet.  An important point:  Anytime  I try out a new strategy I do it via ‘paper trades’ first – instead of actually making the trade, I just write it down or put it in a spreadsheet.  I figure if I stumble across a winning strategy, it will work for years to come so I can afford to wait awhile before I actually put it in place.  Since I tend to stumble across more losing strategies than winning strategies, this practice has served me well over the years.

The results?  See below: 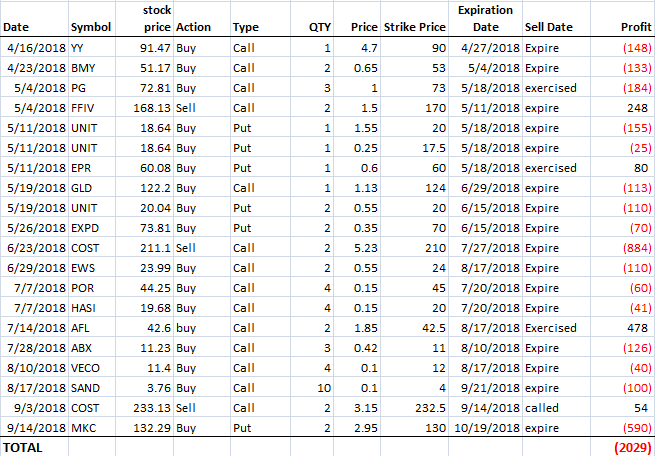 In a word..  Ouch!  Had I actually pursued this strategy it would of been brutal.  Note that for calls I sold (those were hypothetical covered calls), my profit calculations include the opportunity cost.  For instance, for the June 23rd sell of Costco calls  I would of collected $1000+, but at time of expiration the stock was $884 over the strike price + call price, so I missed out on that (assuming I had the stock to begin with).

For now,  I have set this strategy aside, and am going to think about what I learned for a few months.  Maybe I stumbled upon a successful strategy by doing the opposite of what I originally hypothesized.  Perhaps anytime a stock goes above the 10 day RSI, you should buy, and when it goes below sell a call on it.  Or maybe the time premium of options just makes it too hard to be successful.  I don’t know.  What I did reinforce for sure is the value of practicing via paper trades before committing to a strategy.

In late September I took a trip to Las Vegas for a friends birthday, and because I am too good at math to enjoy gambling in the casinos, I had to figure out a better plan.  So I decided to take some of the code I have created and try to apply it to betting on football.  In early September I spent a few hours putting together two models, one for NCAA football and one for the Pros.

My NCAA model looks at the top 25 ranked teams, and applies various factors to the team and their opponent, then spits out a prediction on whether or not the spread is too high.  I placed some mock trades the first two weeks of the season, and had a success rate of 60% or higher each week.

My pro football model was a little different.  I do a confidence pool each week with a bunch of friends where we assign a weight to each team we think will win, giving our most confident pick a 16 and our least confident pick a one.  I had eight years of data from this pool, ran a few regressions, but didn’t find any strong correlations to find a winner.  I finally decided on the method of comparing the consensus picks each week from this pool, comparing those to the spread and betting on the game with the highest divergence.  Using this method, the first couple weeks performed pretty well – in the 60 – 70% accuracy range (against the point spread).   To be clear, nobody in this pool is a clear expert (definitely including myself), so it is an interesting sample of football fan sentiment.

Off I went to Vegas, armed with a spreadsheet of recommended picks.  The results:

What did I learn from this experience?   I am not sure.  I only spent a few hours of spreadsheet work coming up with these formulas, so I find it hard to believe after that I found the magic formula to sports betting riches. And the sample set of 3 weeks is too small to make any firm determination.  However, I do think its quite possible that the sports betting market is much more inefficient than the stock market, so with more analytics it may be possible to come up with a consistent winning strategy.  I would guess most sports bets are made on emotion and hunches.  During my research I found a whole lot of data that could be used to create algorithms to find patterns, and finding games where the spread is distorted by emotion.

So for now, I am going to toss the task of a sports betting model on the pile of software projects in my personal backlog.  But you never know, it could be a whole new career ahead of me.