One of the most under-reported economic stories of 2019 was the problems with the Repo Market and ‘Not QE’.  This article does as good as job of any as explaining whats going on.  This is a complicated topic, which is why it hasn’t been covered outside of the financial press, but it seems to me this will have huge implications in the coming years.

Prior to this, starting in late 2017, the Fed had been (slowly) trying to drain off all the debt it added over the last 10 years. One could argue this was a major factor in the stock market ending down in 2018, with its low in December when the Fed raised rates, and signaled more to come in 2019. In January, the Fed reversed course and signaled lower rates, juicing the stock market to new highs. Now that the Federal Reserve is keeping rates low, they added fuel to the fire by injecting (printing) more money into the system, which has the effect of ending up in the stock market directly. It would seem this is what might be fueling the recent highs in the market.

Another longer term ticking time bomb is all the retirement assets accumulated by baby boomers. As boomers quit accumulating wealth (or die), and they become net sellers of financial assets, that money will be passed back into the economy, flooding the economy with all these T-bills that have been hoarded in these retirement funds. I think this may finally lead to the inflation that has been long predicted by economists when government runs large deficits. Once that money leaves the hands of old savers, and into younger spenders, a lot more money will be chasing the same goods which is a recipe for inflation.

Historical economic theory would assume that rising federal debt would lead to higher interest rates, as supply of debt exceeds demand. So far that hasn’t happened. I think this has been distorted by the huge Baby Boomer appetite for savings, and recent Fed policy is distorting markets by ‘hiding’ this debt on the balance sheet. And because it appears to the public and politicians that ‘deficits don’t matter’, there is no appetite to reign in all the federal debt. So far, its working. But I believe deficits do matter. How long the government can continue to print paper to cover these debts is anybody’s guess. At some point one can assume markets will care? And what will happen when markets do care? That is a question that will be have to be answered sooner or later.

I have been working a lot in Microsoft’s Azure platform, and for the most part it has been a relatively smooth transition. Lots of new things to learn, a fair bit of code refactoring and adapting to the new cloud environment.

Recently, I ran into a odd problem at a client of mine that runs on Azure. My client came to me regarding a January email that was supposed to go out at the beginning of the month, and the January email showed December data.

So I dug into this, and verified the report was scheduled to run on the First Wednesday of every month, and verified that the emails were inserted into our outgoing mailbox a minute after midnight on Wednesday January 1st. I spot checked a few of the emails, and indeed they did have (incorrectly) December information. I looked thru the code, and the sql server stored procedure and still could not find a reason.

Finally, I looked at the job run log and found the problem:

The job that was supposed to run at midnight was kicked off at 11:59:57 by Azure’s job trigger. When the report runs, if checks to see the current month year of the run to choose its data, and in this case, it was December.

It’s curious to me that the scheduler is that imprecise. For years networks have had a common time synchronization service which pretty much guaranteed times across servers, but apparently there is a discrepancy between Azure services. I will have to get use to the idea that these cloud services provided by Azure my be loosely coupled, and these services may be more autonomous than my previous windows network world.

My work around for this is simple. I can delay the run of this job a couple hours, so the job will run at 2:00am instead of midnight. My assumption at this point is 2 hours should be safe. But in this brand new cloud world, there is always something to surprise you.

Time for my 5th annual solar power progress report.  This is the fifth year of my solar production experiment (for the full story click here), and so far things are still OK.  For 2019, the panels produced 3525 kilowatts of power, down almost 2% from the previous year.   Below is a chart of my 4 years of production by month: 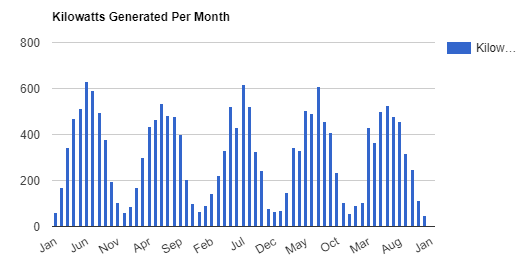 I do believe I am starting to see degradation in the panel performance, as each year production seems to average down.  However, as shown in the chart – our summer in the Pacific Northwest was much cloudier than normal, hitting my peak production months pretty hard.  I forecast an increase in production in 2020, as the weather was abnormally bad during those summer months.

As I have mentioned in previous posts, I had originally penciled out a 6 year payback when I made the decision to move forward with this plan.  Last year after detailed analysis I knocked it back to 10-13 years payback.  This year I have dug a little deeper and have a much better payback analysis.

My current payback analysis shows I should get my original investment amount back sometime in 2028, which works out to a 13 year payback.  This analysis assumes two major factors:

This year I did a projected rate of return for the first time.  Assuming my panels keep producing roughly the same amount of power through 2030, my rate of return on this investment will be around 1.03% a year.  While that is low, its not a disaster.  Also, at the end of the the payback period I will still have functioning panels and the meter infrastructure from the original investment.  So if was to upgrade my panels in 2030, and start the investment process all over again, the installation would be much cheaper and I would get a significantly better payback.

Last year I started recording my power use, as I often get asked what percentage of my use do I generate.  In 2019, my power use was down 4.2% from the previous year.  I attribute this to two factors – less air conditioning during the summer, and a full year of a new energy saving refrigerator.  In 2019, my solar installation generated 47.64% of the overall electricity I used.

I still think residential solar / utility scale wind and solar is the power model of the future.  However, given the current incentive structure I am not sure its economically feasible in many locations in the northwest.   So if you are considering an installation, it will be important for you to estimate your annual production correctly.  If you have any questions regarding a payback analysis, feel free to leave a question in the comments and I can get back to you.