I posted a new article on Seekingalpha.com – check it out at

Right out of the gate Microsoft fumbled the marketing of the XBox One – their new console that they need  to succeed as a catalyst for growth.  When choosing a name for a new product, wouldn’t most companies make sure the domain and other social media handles are available? Not Microsoft.

So now Microsoft has to try to wrestle xboxone.com  from some guy who bought the domain in late 2011.   Kudos to the guy who thought to do that – I hope he settles for a big chunk of the pile of cash Microsoft is spending.  Perhaps even worse, if Microsoft wants the Twitter handle Xboxone – they apparently have no recourse – other than to throw a pile of money at whoever has that.

I did a little checking – xboxtwo.com is owned by Microsoft  (I had my credit card out just in case..).  Someone in China  registered xboxthree.com on May 21st-the day of Microsoft’s rollout.  That person was thinking faster than Microsoft.

I will be watching with amusement at how this plays out – this doesn’t give me much confidence that Microsoft can execute the launch of this product any better than they did Windows 8.

Interesting article here on a possible bond vortex that could be of interest if you own bonds or follow the bond market:

This article gives an interesting insight into how the industry of managing interest rate spreads can cause a wobble in markets.   It will be interesting to see if 10 year T-bill rates hit 2.2 or 2.25, then interest rates start getting spiky.

The 10 year T-bill rate has been falling since forever.   If rates do jump, it may be a time to start looking at your bond holdings, and increase them if you believe Bernanke will do what he can push them back down.

Many theories exist on why humans evolved to walk on two legs with the savanna theory being the most accepted.  While I am not a big believer in the savanna theory-this article makes even less sense to me.  Quoting from the article;

“The broken, disrupted terrain offered benefits for hominins in terms of security and food, but it also proved a motivation to improve their locomotor skills by climbing, balancing, scrambling and moving swiftly over broken ground — types of movement encouraging a more upright gait.”

“The varied terrain may also have contributed to improved cognitive skills such as navigation and communication abilities, accounting for the continued evolution of our brains and social functions such as co-operation and team work.”

These statements seem totally without merit to me – aren’t most animals adept at scrambling  quadrupeds? Wouldn’t  there be other example of bipedal mountain creatures?  Seems to me bipedalism would be a detriment to scrambling.  And how does varied terrain improve communication abilities and teamwork?  How did they come up with that leap of conjecture?

I am not a big believer in the savanna theory – but the conjecture behind this latest theory seems even less sound.   I don’t understand why the Aquatic Ape Theory doesn’t get more traction in scientific circles – especially when I see other  competing theories.

Asset Allocation has always been a puzzle for me.  All the financial advice says your asset allocation depends on your risk tolerence and age, but thats about it.  I stumbled across this paper which gives some ideas on how to determine what a good target allocation would be based on your opinion of future inflation.

Now this paper is pretty heavy reading – lots of numbers and ration and analysis.  So I will preview my favorite chart in the article: 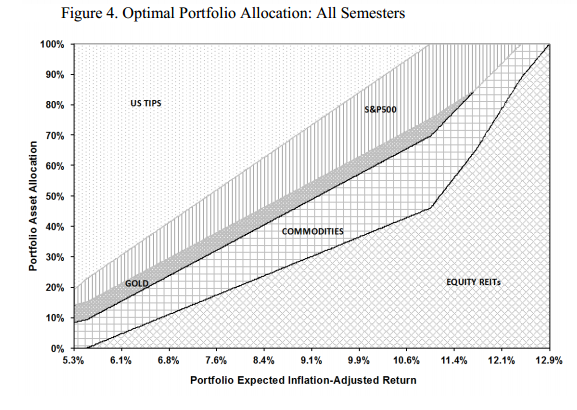 The gist of this is, as your inflation expectation increases, the article suggests you should increase your investment in equity REITs, as they have the best ability to increase prices along with inflation.  This article was published in 2011, so it doesn’t factor in the huge runup REITs have seen.   I would also of liked to have seen commodities split out in a more granular way – perhaps comparing oil vs copper vs farm products, but it is an interesting alternative way to consider asset allocation.

If this is a topic of interest, this article is definitely worth a look.