I was intrigued by Amazon’s announcement of the Fire Phone.  This phone is  a device with some new consumer technologies that makes easy to buy almost anything on Amazon   – and oh – if you still make phone calls you can do that too.

I wonder if we are approaching a world where we have not just one mobile device but multiple mobile devices.  The Fire phone seems optimized for shopping and exploration, and maybe a TV remote if you are in the Amazon Prime eco-system.

As I mentioned in a previous post, I would prefer to have a laptop and a tablet, rather than an all-in-one Microsoft Surface type solution.  Maybe the same is true for phones.  Maybe in the future, we have a phone optimized for when we are shopping, a phone for connecting to the office, and a portable device for home automation.

Blackberry is making a bit of a resurgence with its new operating system that allows it to run Android Apps.  With Blackberry’s enterprise server software making it a good solution for VPN’ing to your office, maybe every office worker will have a device just for communicating to the office.   And you can still play Android games on it when nobody is watching.

Most of my friends have more than one computing device – phone, tablet, laptop and / or desktop, each device that performs some tasks better than the others.  Assuming the price of devices continue to fall, perhaps we are not too far off from even more specialized devices, rather than one mobile device that tries to do it all.

I was asked today if I had to pick one stock to buy today, what would  I pick.  Scanning through my list on Puget Investor,  I decided on SodaStream (SODA).  Every stock is pretty much a guess about future results, but I think SODA has more chances to succeed than fail.

Lets look at some numbers and charts to help me make my case.  Here is an interesting table that was included in SodaStream’s 1st Quarter 2014 results.  When these results were announced, the SodaStream stock price took a big hit because net revenue growth was slowing and revenue declined:

What stands out to me is CO2 refills are up 22% – which means people use their SodaStream machines pretty consistently.    They have engaged their customers and get pretty good repeat business.

So lots of repeat customers, and still lots of room for growth: 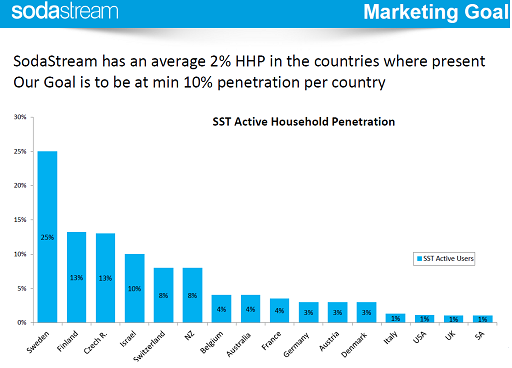 Current US penetration about 1% – and 10% doesn’t seem impossible.  However, revenue growth has been slowing for the past few quarters.  Below is a chart comparing recent SodaStream growth to Coca-Cola (KO): 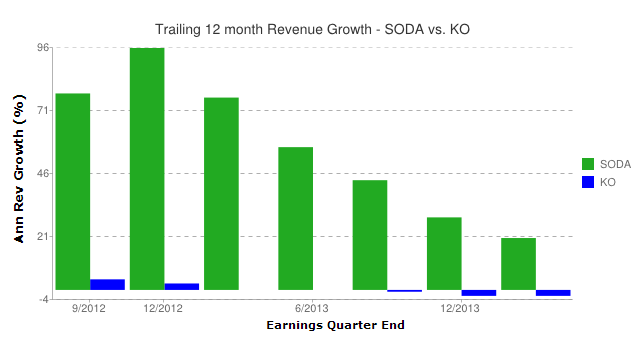 I think revenue growth for Soda still has the potential to shrink, but I have faith that growth in new markets and related CO2 refills will help keep growth healthy.  In its earnings report, the company provided guidance that it expected revenue growth for 2014 to be approximately 15%.

Coca Cola, with its revenue growth shrinking, has taken a stake in SodaStream competitor Keurig Green Mountain.  This is mainly seen as a positive, as Coca Cola has validated the concept of the in home soda machine concept.  Over the last few months rumors have arisen that Pepsi or Starbucks were interested in taking a stake in SodaStream, which would be a positive for the stock price.  If Coca-Cola is right, and the in-home soda market is an underserved market, Pepsi, Dr Pepper or Starbucks would want to be in that market and be looking for a partner.  One other item of interest is that SodaStream would likely compare favorably cost-wise to a K-cup based product that might come out of the Coca-Cola partnership. 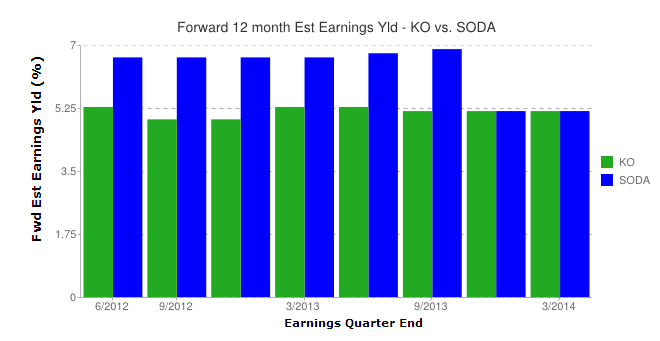 On a 12 month forward earnings basis, Coca Cola and SodaStream are evenly priced.  Coca-Cola has the benefit of stability and larger market cap, but Soda stream is growing 15% a year compared to Coca Cola’s flat growth.

The downside for SodaStream?  Keurig could come out with a superior soda maker, or the in-home soda making concept could be a fad and die out quickly, or management could make some wrong moves.   All stocks have  a bull case and a bear case – its up to the investor to figure out which side of the fence to be on.  Given the recent sales numbers and the low price, I think Sodastream has the best risk reward ratio of all the stocks I follow.

Even though Bill Mauldin’s articles ooze of big money and one-percent lifestyles, I always find his articles thought provoking.  His latest free look into his paid service for high wealth investors has some interesting thoughts.

He is fairly doom and gloom on the world economy for the rest of the decade, but he does raise the interesting thoughts about the world economic condition.   He points out how world markets seem pretty complacent to all the lurking issues, and someday something is likely to snap.

I thought the second part of his article was more thought provoking than the first – where he discusses the next wave of technology transformation.  If you don’t want to wade through the whole article, at least skim the second part.  The image posted of the 1991 Radio Shack Ad makes a great point as we look forward 20 years.

He has a lot of observations on technology without coming to any solid conclusions.   I appreciate that, as its up to the reader to think about what he says and how the future will unfold.

A couple interesting developments in the Solar power world:

1.  Interesting article here on the impact homeowner solar is already impacting electric utilities.  From the article:

Barclays recently downgraded the entire U.S. electric utilities sector to “underweight” on the threat posed by widespread adoption of solar-storage.

So if Wall Street is pulling their money from electric utilities, could be a harbinger of bad times ahead.  Utilities have been trying to fight back with surcharges and fees for home installed power, but with the costs of solar dropping between 5 & 10% a year that won’t be enough to stop the momentum.

2.  Lots of creative ideas around implementing solar power.  One of the more interesting that is starting to get traction is Solar Roadways.  The premise is intriguing, lots of solar energy wasted on hot pavement around the world – why not build roads out of material that will capture that?  One would think the incremental cost of building roads or parking lots out of solar panels would be or will be cost competitive.  Business Insider has an update on the project here.  While I think its unrealistic to retrofit roads with these panels, new projects seem like it may make sense in the long term.