One of my favorite terms used in investing history is ‘Irrational Exuberance’, a term Former Fed chair Alan Greenspan used in a speech on December 5th 1996.  At the time, everybody was bullish, and the stock market was on a tear as shown by the S&P 500 chart below: 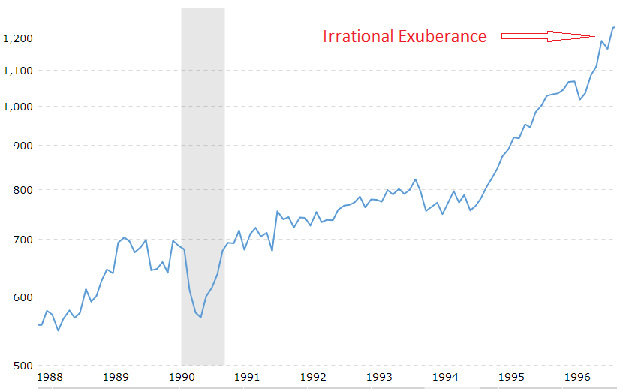 The full quote by Greenspan was:

Clearly, sustained low inflation implies less uncertainty about the future, and lower risk premiums imply higher prices of stocks and other earning assets. We can see that in the inverse relationship exhibited by price/earnings ratios and the rate of inflation in the past. But how do we know when irrational exuberance has unduly escalated asset values, which then become subject to unexpected and prolonged contractions as they have in Japan over the past decade?

Looking at the above chart, its easy to see why there was a concern that irrational exuberance was fueling a bubble.  But remember, we had four more years of ‘irrational exuberance’ and rising asset prices, ending with the crazy dot com bubble of of 2000 – 2001.

Looking at the S&P 500 chart since then shows an interesting story: 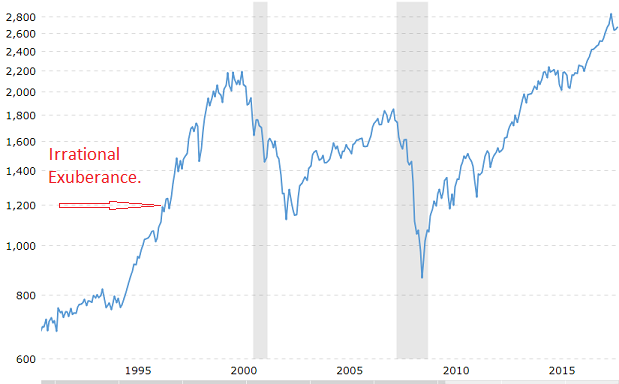 Two ways to look at this.  If you got out of the market at the point of ‘irrational exuberance’, you would of missed out on almost a double of the market in 3 years.  However, you could of gotten back 13 years later in the spring of 2009, when the market was at its 2008 lows.

I bring this up today, because many investors feel we are again at a point of irrational exuberance.  2017 was the first year in history where the S&P 500 was up every month of the year.  So I tend to agree we are again irrationally bullish.  But just because the market may be crazily priced, it still may go up to even more irrational heights, and it may take years for the market to recognize it.  However, it is also a reasonable bet that in the next 5 years there will be a point where the market will be cheaper than it is today.  Remember, we are currently in the 2nd longest economic expansion in American history, and with the yield curve flattening, it looks like the party may be coming to an end – if you look at it rationally.

When I saw this Jeff Bezos interview, it occurred to me that I have never really watched or read an interview with him.  Gates, Buffett, even Paul Allen you hear from more than the founder of Amazon.com.  It was interesting to hear his perspectives on Amazon, his driving principles, his background, and he comes across as a thoughtful guy.  I also liked the interviewer here – I thought he asked some great questions and really hit a wide variety of issues.

Its a long video, but if want to get the perspective of the richest man in the world, watch the video below.  If you prefer, you can view the transcript here,  but I think the video provides a full insight.