A few things stood out to me when  I read this report regarding cloud computing market share:

First I was surprised at the amount of revenue cloud computing is already generating for these companies.  We are very early in the cloud computing model, and I think this will be huge going forward for whatever company wins the battle.

Second, I was surprised at Google’s market share in this world.  You rarely hear about Google’s cloud initiative, and I have never run across any company that uses Google’s Cloud service.

Third, I thought Microsoft was way ahead of the other non- Amazon competitors.  Microsofts Cloud (Azure) is the hub to Microsofts next post-Windows business model.  I think Microsoft and possibly and possibly Salesforce have the most to lose by not gaining market share.

Cloud computing makes alot of sense for alot of companies, and because it is so competitive prices will be very attractive.  Whoever wins this battle will have a very lucrative business model for years to come.

If you would like a brief overview of cloud computing architecture, this article from Rackspace is a good overview.

In response to my previous post about whether to buy or sell just on the basis of a 10 month moving average,  I decided to publish some back testing results of the process.

This test assumes you  bought or sold at the start of the each month based solely if the S&P 500 was above or below its 10 month moving average by one percent.  This test also assumes if you sell, you just have the money sitting in cash earning no interest.  In the table below, I test using 100 shares of S&P 5500 index fund – comparing the 10 month moving average approach to just buying and holding the index:

Note that in recent months, the moving average approach underperformed just buy and hold, primarily to some ill-timed sales.  So  I would agree there is a cost to this approach during low volitility periods of the market, however it does appear to provide insurance against major downside moves.

As I mentioned in my previous post, I have been looking into asset allocation due to my concern about the both the stock market and the bond market in bubble territory.   More and more articles are discussing the high valuation of the market, and attributing it to the abnormally low interest rates.  It is rational to believe people are investing in the stock market only because there is no better alternative.  I thought this article from John Mauldin had the best quote:

One of the keys to any bubble is usually loose credit and lending. To finance all the new consumer goods, in the 1920s installment lending was widely adopted, allowing people to buy more than they would have previously. In the 1990s, Internet companies resorted to vendor financing with cheap money that financial markets were throwing at Internet companies. In the housing boom in the 2000s, rising house prices and looser credit allowed more and more people access to credit. And a new financial innovation called securitization developed in the 1990s as a good way to allocate risk and share good returns was perversely twisted into making subprime mortgages acceptable as safe AAA investments.

In this time of record (artificially) low interest rates we are seeing money being flooded into the marketplace, just like previous times of loose credit.

So during my asset allocation adventure,  I was trying to decide what percentage of assets  I want to invest in the stock market.  My first inclination was to be real conservative.  However, other investment alternatives offer little hope of capital appreciation, so if the bubble bursting is a ways off then that would be the wrong choice.  So this let me to look at other strategies being used  for mitigating stock market risk.  I stumbled upon this paper by Mebane Faber  and it alerted me to a technical indicator that I hadn’t applied to the stock market before. 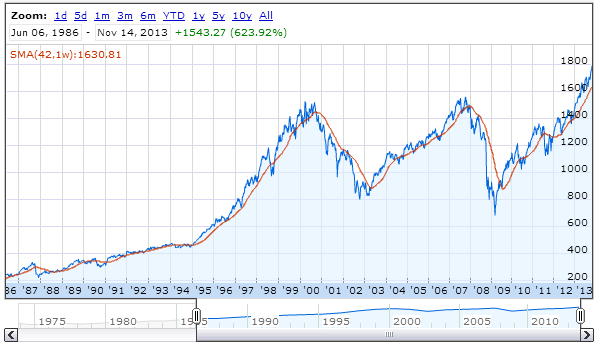 I am in the process of looking at this a little closer, and backtesting various moving averages.  One concern about the +1 / -1 rule is it seems on the surface it seems counter-intuitive  you are using a rule to sell low and buy high.  However, my eye keeps going back to this chart.  I am still not sure I can fully trust such a simple indicator,  but it is something worth keeping an eye on.

In past posts  I have complained about Quantitative Easing being a stealth bank bailout.  Now the cat is out of the bag, as the man responsible for orchestrating QE confesses it is  “the greatest backdoor Wall Street bailout of all time”.

In this brutal Wall Street Journal op ed, he confesses paints a bleak picture of the Quantitative Easing and its effectiveness:

Even by the Fed’s sunniest calculations, aggressive QE over five years has generated only a few percentage points of U.S. growth. By contrast, experts outside the Fed, such as Mohammed El Erian at the Pimco investment firm, suggest that the Fed may have created and spent over $4 trillion for a total return of as little as 0.25% of GDP (i.e., a mere $40 billion bump in U.S. economic output). Both of those estimates indicate that QE isn’t really working.

Yet we continue with the same approach, trying to spur the economy by lowering interest rates, even though rates are near zero.  Why has no thought been given to lowering the payroll tax or some other plan to put more money in the pockets of the working poor?  Instead we continue to prop up Wall Street institutions by weakening the asset base of the US Treasury.

I doubt the US Treasury will ever be able to reverse the damage done to our balance sheet.  I just hope we can avoid the next financial panic until we get over the previous one.

I have had some extra time of late, and have delved into the rabbit hole of asset allocation.   I have traditionally maintained an asset allocation balanced between stocks and bonds, and of late that has made me nervous because these both appear to be in bubble territory due to the artificially low interest rates being held down by quantitative easing.  My adventure started with this blog post by Mebane Faber on the performance of various asset allocation strategies over time.

This was a nice primer to how different financial schools of thought look at Asset Allocation.   Vanguard has a nice overview of some of the principles of Asset Allocation, though again it is just limited to stock classes vs bond classes.    If you use Quicken, you know their asset allocation tools are pretty basic, and in this investing environment possibly counter productive (if interest rates start to rise – both stocks and bonds will take a hit).     So it was nice to see some other more complex views of Asset Allocation Categories.

Having said that, the big takeaway for me was maybe it didn’t matter much. Note the chart at the bottom of the article shows the various allocations all performed pretty close to one another over time.  So maybe the investing world does just boil down to investing in a balance of equity vs debt, and all the subclasses in some of these strategies are just noise.

The financial press constantly hammers the point home that Asset allocation is very important, and that each person has to figure out what allocation is right for them, yet everybody has  a different opinion.  So after factoring all this information in, and my worries about both the valuation of the stock and bond markets, I have decided to take the super diversified route and tracking my asset allocation across more granular categories.  I have set target allocations for TIPS, REITs, Equitys, Emerging Foreign Markets, Developed Foreign Markets and more.   I am hoping this will reduce the shock of any bubble bursting, without greatly reducing my rate of return.  This decision also commits me to have a mechanism to track all this – to see if it does make sense.  I have developed a prototype that I am happy with, and hope to add this mechanism to Puget Investor in future months.

I’d be curious to hear if there are any other thoughts on asset allocation out there – please leave a comment if so.  I guess I haven’t fully emerged from this rabbit hole, and am still up for a little more exploring.

Interesting overview of how the Somali piracy industry works.

It doesn’t sound a whole lot different than the drug trade – fueled by the imbalance of the ‘haves’ and the ‘have nots’ in close proximity to each other.  The higher the wealth gap between two parties, the less rule of law matters.