The thing I found most interesting out this Consumer Reports report on carcinogens in Pepsi was Pepsi’s defense:

Consumer reports found the levels of caramel coloring  in a can of Pepsi should require a cancer warning.

It [Pepsi] cited government consumption data that shows that the average amount of diet soda consumed by people who drink it is 100 milliliters per day, or less than a third of a 12-ounce can. For that reason, they believe that Pepsi One does not require cancer-risk warning labels—even if the amount of 4-MeI in a single can exceeds 29 micrograms.

So Pepsi is stating it can defend that its customers on average drink less than a third of a can a day (this argument is obviously flawed, because an open can of Pepsi goes flat in a couple hours..).  Perhaps they are thinking when people have a couple freinds together the split a can 3 ways.   Or,  maybe they are saying that the average customer drinks one can every three days.    Based on my not-to-scientific observations, I would say people either drink a lot of Pepsi every day or not at all.

So based on their defense – I consider them guilty as charged.

Richard Sherman is my new favorite Seahawk.  Not only an incredible athelete – but a shrewd businessman.  While I do believe that part of his infamous post game interview with Erin Andrews was an emotional outburst – I also  believe at least part of it was part of the master plan.   Richard Sherman is a smart guy – Graduated from Stanford with a communications degree.  He probably has given some thought about managing the media.

Was it a coincidence that his new Beats commercial documenting his reputation as a thug debuted during the game?  Richard Sherman is a man who knows how to build his brand.  Do you think he gave some thought how best to position himself against golden boy Peyton Manning during the two week media frenzy preceding the Super Bowl?

Below is a chart from Google on the top searches on the day of the NFC Championship: 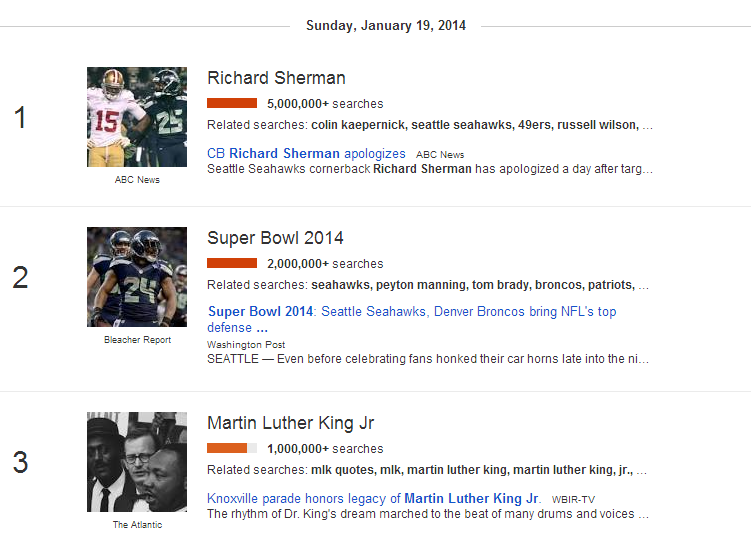 More than twice as many searches as the next most popular search term.   That’s not easy to accomplish with a 30 second interview.   I think it will be an interesting couple of weeks to see how the NFL manages this incursion into their brand.  My guess is they will be all for it – build in the reality show angle of crazy personalities.  Most of America thinks Richard Sherman typifies what is wrong with game of NFL Football.  I agree his antics my tarnish the game, but  I think he is providing an interesting model for other players to follow in the business of NFL Football.

I am surprised at how long it has taken to make real advancements in virtual reality gaming.  It seems the technology has been around for years, yet no product has really gained a foothold.  Microsoft Kinect, the fastest growing consumer device, has largely been a bust for adventure or first person gaming.

Finally some hope is on the horizon.  The Oculus Rift virtual reality headset has been on the horizon for a couple years now, and it looks to be close to be on the market – with a price point rumored to be around $500.  Couple this with the promise of the Omni Treadmill – and it looks like there is hope for a mass market virtual reality gaming setup.

What I like about the Treadmill is how simple it is – its not a treadmill – its just a sensor platform.  It seems to me if this product gains momentum, they could get the price down to a nice level – maybe a few hundred dollars?

So in the next few years – could I dare envision a world where you can pick up an Oculus Rift and Omni Treadmill for under $500?  If that was to happen, that could be a huge change in the world of home entertainment.

If you believe the business of the NFL is ratings, then there are definitely some Super Bowl matchups that the NFL would prefer and prefer not to have.  Check out these maps of Facebook likes for each playoff game:

Based on this data, can we assume:

1.  San Diego vs Carolina  – little public interest outside of 3 states

A couple wild cards here (no pun intended).  San Diego in the Super Bowl would increase NFL interest in the Los Angeles area – where the NFL wants an expansion team, and will likely push for  public support to build a stadium.  Alternatively,  Seattle could be positioned as the bad-guys of the NFL – call it the black-hat team – that could make for an interesting story line against good guy quarterbacks Peyton Manning, Tom Brady, or even an up an coming star like Andrew Luck (I doubt the same storyline could be created around Philip Rivers of San Diego).

Denver vs New Orleans would provide a better national audience – Denver brings in more West Coast interest.  Its all about the marquee quarterbacks. Therefor it might be interesting to introduce Andrew Luck to the national stage – start transitioning the marketing away from these aging quarterbacks.  I doubt Cam Newton and Colin Kaepernick is in the NFL’s long term marketing plans.

San Francisco would be a reasonable alternative for the Super Bowl – though New Orleans brings in the south plus the upper Midwest where Drew Brees was the star QB at Purdue.

So as I watch the playoffs progress – these are the storylines I am watching.

Several months ago I wrote a post regarding the Japanese economic experiment with Quantitative Easing.  Since then, a couple other interesting developments have occurred in Japan that have me thinking.

1.  Quantitative Easing continues:  While I am skeptical that Abenomics will work, so far it appears to be pleasing the masses:

For 2013, the Japanese stock market closed up 57 percent, while the Yen depreciated against the dollar by 25%.  So printing money appears to be the short term solution to Japan’s economic woes, however they are building a huge debt hole that they will eventually have to deal with.   And there is more to come.  According to the above article:

A Reuters poll conducted earlier this month found that almost two-thirds of Japanese firms expect the BOJ to increase its stimulus in the first six months of 2014.

I still think this policy will be seen as greatly helping Japanese industry at the expense of Japanese labor – much like the impact of American Quantitative Easing.

In an odd move, Japan rushed through a National secrecy bill to ‘restrict state secrets’ from the media:

Quoting from this article:

Mr. Abe has said that tighter controls of state secrets were needed to plug holes in Japan’s protection of information and, most important, to persuade the United States to share more of its sensitive military intelligence. With China’s rise and increasing assertiveness, Mr. Abe has been leading Japan to become a more full-fledged military ally of the United States.

The tighter controls are very vague:

The current wording gives the heads of government agencies the power to declare information off limits if it touches on such sensitive national security areas as diplomacy, defense and anti-terrorism policy. Those found guilty of leaking these secrets could face up to 10 years in prison, far longer than under Japan’s current laws.

The secrecy bill was submitted in tandem with the bill to create a National Security Council that Parliament approved this week.  Political analysts say the twin measures are the first steps in a legislative agenda that could eventually see Mr. Abe try to fulfill his long-held goal of revising his nation’s antiwar Constitution to allow for a fully developed military instead of purely defensive forces — still a controversial idea in Japan.

Prime Minister Abe recently made a calculated visit to a controversial WW2 shrine:

It’s not clear what Abe had to gain by visiting the shrine – except to increase Japanese Nationalism at the expense of its relationship with its neighbors.  Given the ongoing land dispute between Japan and China that has the potential to escalate into a conflict, it seems an odd time to purposely cause a ruckus.

So maybe these 3 developments won’t amount to much – just more noise in world news.  However,  I am taken by the parallels to the 1930’s,  where Japanese and German leadership spurred economic growth to fuel industry, at the same time encouraging nationalism fervor.  Add in manipulation and government restriction of what information can be reported to the public, and it sure looks like history has the potential to repeat itself.