Bill Gross has long been considered a Bond King, until recently the fund manager at Pimco Total Return which is the largest Bond Fund in the world.  He has been a media celebrity since the mid 1980’s, and had a well publicized falling out with Pimco which tarnished his legacy.

I  have always found his opinions on markets worth listening too – and his latest published outlook on where we are headed strikes an interesting tone.  Gross is now at Janus Funds, where he appears to have editorial license to say what he wants. Perhaps because he is turning 70 years old he is overly gloomy, but he obviously doesn’t like what he sees down the road.

A few excepts from his letter:

On the current world view that Quantitative Easing will cure the world debt crisis:

(At a recent conference) I equated such a notion with a similar real life example of pouring lighter fluid onto a barbecue of warm but not red hot charcoal briquettes in order to cook the spareribs a little bit faster. Disaster in the form of burnt ribs was my historical experience. It will likely be the same for monetary policy, with its QE’s and now negative interest rates that bubble all asset markets.

On the end of the financial bull Market:

When does our credit based financial system sputter / break down? When investable assets pose too much risk for too little return. Not immediately, but at the margin, credit and stocks begin to be exchanged for figurative and sometimes literal money in a mattress.  We are approaching that point now as bond yields, credit spreads and stock prices have brought financial wealth forward to the point of exhaustion.

He makes an interesting point about fees charged by investment professionals:

Active asset managers as well, conveniently forget that their (my) industry has failed to reduce fees as a percentage of assets which have multiplied by at least a factor of 20 since 1981. They believe therefore, that they and their industry deserve to be 20 times richer because of their skill or better yet, their introduction of confusing and sometimes destructive quantitative technologies and derivatives that led to Lehman and the Great Recession.

At the end of last year,  I wrote an article on Seeking Alpha wondering if 2015 would be the year that eMagin turns around.  eMagin is a company I have followed for years, and the company has always shown great potential, but never achieved.

Recently their earnings came out, and on May 15th the stock popped up to 33% on good earnings – the appearance is that they are starting to ramp up on production, and breaking into the potentially lucrative market for virtual reality headsets. 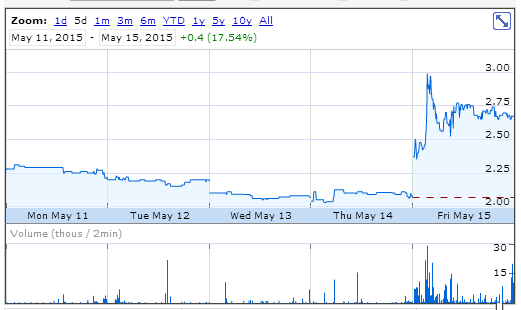 So is this the turnaround that I have been long awaiting?  I would recommend anybody invested in eMagin read the earnings call transcripts on Seeking Alpha.  As per usual, the call is upbeat, and the description of market opportunities leads one into wanting to back the truck up and load up on shares.   However, I have been too jaded by previous upbeat results, and while results were encouraging, the top line revenue numbers still don’t get me too excited.

The big highlight on the earnings call (other than having a profitible quarter after 7 negative quarters) was the progress on the virtural reality headset.  From the earnings release highlights:

Management is talking a big game about breaking into the virtual reality headset market, and mass producing their product to meet huge demand.   It appears they are working on a very high end display – which may well be best in class – however cost when producing consumer goods (especially consumer goods in a new category) will be a huge factor to the product’s success.  If they can provide a premium display and a cost similar to the competitors – then I may start to get excited.  They have some big competitors in the space, and there is a lot of attention on the virtual reality market opportunities in the near future.

So I for one will wait another few quarters before getting too excited  watching and waiting for those revenue numbers to start moving up.  I am encouraged by the long awaited profitable quarter, but I am still not sold that this is turnaround moment all investors have been long waiting for.

I will admit I hadn’t tied the whole Russell Wilson contract negotiations and this baseball sideline thing until I read this article about baseball not being a ‘ploy’.

This is setting up to be an interesting face-off between the Seattle Seahawks and Wilson.  Wilson goes into the 2015 season in the last year of his rookie contract – set to be paid a paltry 1.5 million  in 2015.  He is in renegotiation talks to redo his contract this year, at upwards of 20 million plus per year for several years.

All things being equal, it would make perfect sense for the Seahawks to not renegotiate his contract, make him play at 1.5 million, then franchise him next year for 20+ million,  then redo his contract.  This would effectively be paying him 10 million a year over two years, at a time where the Seahawks are hot and could spend that money elsewhere to continue their championship run.

Russell Wilson must be able to see this scenario – hence the renewed interest in baseball.  If Russell Wilson had a reasonable chance to get called up to play for the Texas Rangers in September, and gets paid say $500,000 – why wouldn’t he do that, and tell the Seahawks he plans to sit out the last year of his contract?  The notoriety he would gain from this in endorsements would more than offset any financial loss he would incur.  The Rangers would also be  incented to bring him to the league, as that would be a great marketing tool to bring fans to the ballpark in September.

So I think this is going to be an interesting story that will unfold in the next few months.   Rumor has it that the contract negotiations are at an impasse – I think Russell Wilson is smart to try force the Seahawks to ‘show him the money’ – and I think it will work.  This baseball ‘ploy’  may be worth millions for Wilson to play baseball in 2015, and give him the leverage he needs to get his contract rewritten.

Note:  I occasionally cant help myself and venture into sports topics – but for more sports blog commentary be sure and visit http://badboys.vfsystems.net/

The short term interest rates around the world have been interesting to watch of late – more and more short term government bonds are going into negative interest rate territory.  As of this writing, the German and the Swiss 2 year bond is yielding a negative market rate.  Even the Bank Of Japan 2 year bond market rate is negative, which given the Japanese government huge debt issues, has me confounded.

I have yet to wrap my head around why someone would buy a security in which the promised rate of return is less than what you put into it, unless you are looking at money as a commodity, in which case you are OK paying a storage fee.   Perhaps the next great invention will be using stacks of money as home insulation, or maybe governments should just start minting $1000 coins making it easy to stash a fortune in the backyard.

While I have yet to see any American debt instruments go negative, we finally hit a 0% rate.  The Government Inflation adjusted savings bond rate came out on May 1st, and here is the interest rate for the next 6 months:

Purchasers of I-Bonds must keep the bond for a minimum of 1 year, and pay an interest penalty for withdrawals before year 5.  So why would someone put money in an I-Bond, instead of just putting it in a bank or credit union and getting a whopping .10% interest rate?  Since I-Bond rates reset every 6 months, purchasers today are guaranteed a rate of 0% until November 1st.

Perhaps this is a forecast that that negative short term rates are coming to the United States.  Perhaps we soon will see banks and credit unions unable to pay interest on deposit accounts, and institute account fees higher that effective interest rates.  If that will be the case,  I-Bonds do make a reasonable alternative – because if deflation heats up, I-Bond holders never see the rate go below 0%.

Who would of thought 7 years after the financial meltdown the financial markets are still in turmoil and rates are still at Keynesian stimulus levels.  Perhaps paying interest on deposits is becoming an antiquated notion, a victim of the financial crisis.  Or this has to be some sort of distortion, or bubble, in the currency markets – that will have to work its way out.