I was reviewing my portfolio recently and decided it was finally time to remove Corning (GLW) from my Puget Investor Portfolio.  I originally started accumulating Corning starting in 2011 thru 2013, as I felt it was a fairly low risk cheap stock that would benefit from the global increase in cell phone ownership (Corning’s flagship glass product is Gorilla Glass used on most SmartPhones).  The stock also yielded over 2% so it seemed a safe bet even if the stock went nowhere.

The thesis worked out pretty well – as  Gorilla Glass maintained its popularity with manufacturers, the stock slowly crept up.  In addition, since 2011 the dividend has increased from 7.5 cents a share to 12 cents a share.

Recently however, with the likely drop off in the Chinese economy,  my recent loss of faith in Apple, and the rising competition for glass products from Samsung, I decided I no longer had a clear reason to hold Corning.  True that Corning has been holding off the competition for years, but I really don’t know if their glass is better than the up-and-comers.

GLW and I part as friends, as I feel I did OK in this case, and indeed I may pick some up again in the future.  Corning seems like a solid holding, and sometimes I am a sucker for dividend yields, and GLW still yields 2.78.  But starting in October Corning will out of the Puget Investor portfolio, part of my ongoing review of my holdings and making sure I have a valid reason for owning particular stocks.

Financial media has been abuzz of late regarding Thursday’s Fed meeting where we find out whether or not the Fed raises the overnight interest rate a quarter point.  I am beginning to think this is the Trump-ization of the Fed – much like Trump has brought politics closer to the realm of entertainment – the Fed rate hike is now starting to move into mainstream conversations at the water cooler.

Anyway – Peter Schiff wrote an interesting piece on what I think is more important regarding interest rates – things affecting the long end of the treasury curve (see http://www.europac.com/commentaries/meet_qt_qes_evil_twin).

Remember the Fed can only impact short term rates with rate hikes – to lower long term rates they had to use quantitative easing to aggressively buy mortgage backed securities – thus making it so debt issuers could offer lower rates than they would otherwise because the Fed had their back.

Schiff cites 3 trends which may have a much bigger impact on rates going forward:

Without the Chinese buying up our treasuries – who will we sell debt to?

The steep fall in the price of oil in late 2014 and 2015 also has led to diminished appetite for Treasuries by oil producing nations like Saudi Arabia, which no longer needed to recycle excess profits into dollars to prevent their currencies from rising on the back of strong oil. The same holds true for nations like Russia, Brazil, Norway and Australia, whose currencies had previously benefited from the rising prices of commodities

Potentially making matters much worse, Janet Yellen has indicated the Fed’s desire to allow its current hoard of Treasurys to mature without rolling them over. The intention is to shrink the Fed’s $4.5 trillion dollar balance sheet back to its pre-crisis level of about $1 trillion.

So with all the potential lack of buyers for all this US debt, whether or not the Fed changes the overnight rate seems pretty inconsequential.  I will be listening to hear if the feds plans to stop rolling over it’s maturing treasuries.  Or… given the China and Middle East decline in purchases – perhaps the Fed will go the other way,  and hint at QE4 (start buying securities again to keep rates from rising)?

As an investor I am late to the party as far as following technical indicators.  Only in the last few years have I been really looking at momentum when it comes to stock prices.  In particular, it is clear to me that the US stock market as measured by the Standard and Poors 500  (S&P 500) can show predictive negative and positive patterns.

Recently, the S&P 500 dropped below its 200 day moving average.  To see what historical implications this has, take a look at this article.  A great statistic quoted in the article: 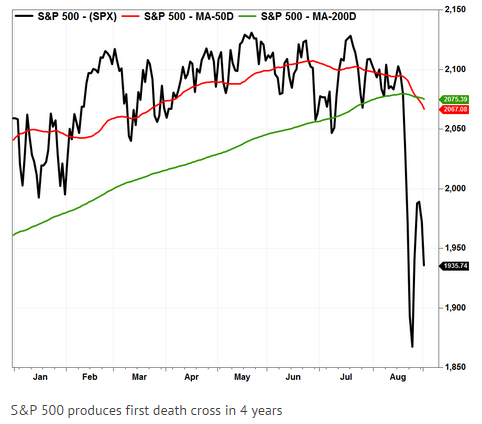 Its easy to look for technical reasons to be bearish when the market is having the recent wild swings  – so I have to be careful  to not let the drops cause a sell low buy high mentality.  But in tracing these technical indicators an moving averages on Puget Investor, if you look at the historical performance of weighting and un-weighting the S&P 500 you can see a profitable pattern develop.

So as an investor you have to decide, should I sell now that the market is 10% off its highs, and sell at the bottom of the correction, or is this the start of a long term decline and get out while you can?  Nobody knows – but I am leaning at least in the short run to lighten up on my stock allocation, given the prevalence of these negative technical indicators.