I stumbled across this chart on Business Insider, and it caused me to wonder about what this means: 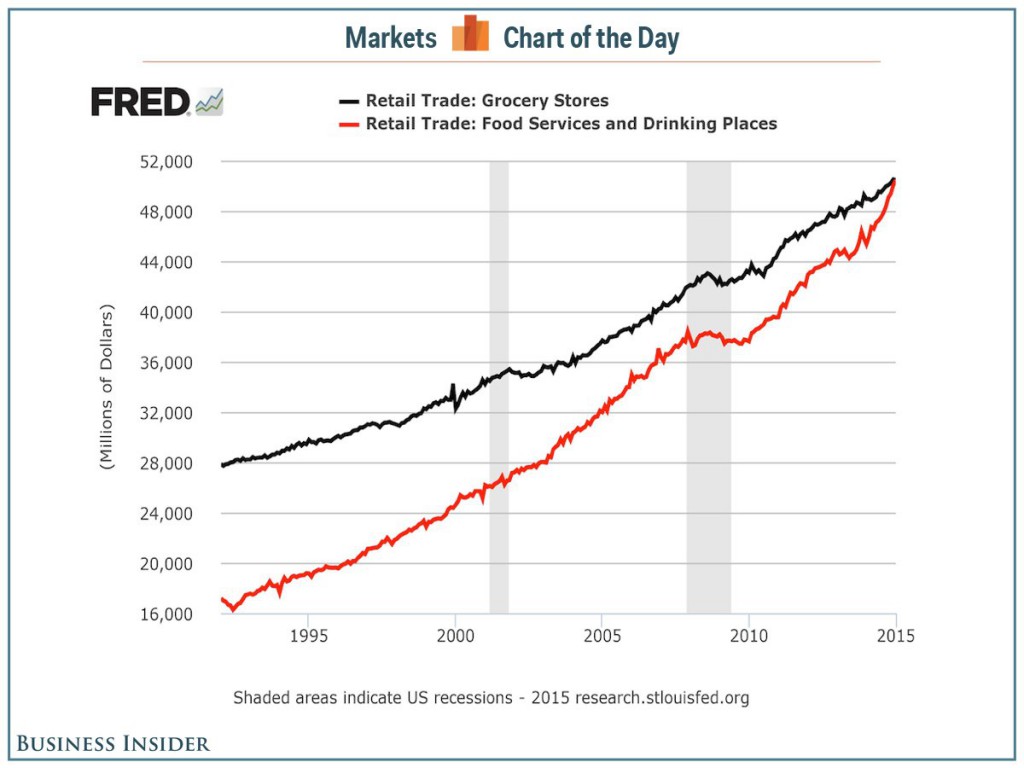 For the first time, more money is being spent on dining out than on grocery purchases.  I guess it makes sense that as the economy improves, more people dine out.  But this gap has been closing for years – what demographically is going on?

One would think that with the rise of popularity in designer kitchens and Whole Foods, the trend might go the other way as people host more dinners rather than going out.  Contrarily, perhaps the rising young urban population is driving this change.  However, this has been gradually increasing since the early 1990’s – so that doesn’t compute.

Perhaps its tied to the increasing efficiency of restaurants.  The rise in fast casual restaurants (i.e. Chipotle) that can pretty efficiently provide meals for near the cost of buying the ingredients yourself may be driving this trend.  I have always wondered, shouldn’t a restaurant be able to someday provide meals cheaper that you can make yourself – given that they buy in bulk?  Perhaps as restaurants use more automation and smaller footprints this will happen.

Perhaps this trend is being driven by the ‘rise of the 1%’.  The ultra rich have been the biggest benefactors of the recovery since 2008, and maybe their spending at fancy restaurants finally tilted the balance.  This could be either proved or disproved if we had data going back to say 1960 – to see if this trend was happening even when the middle class was stronger.

So my conclusion is – no conclusion without more data.  At this point it is just statistically interesting.