Time for my third annual Solar power progress report.  Overall, I saw in increase in solar production in 2017 over 2016, likely all weather related.  Below is a chart of my 3 years of production by Month: 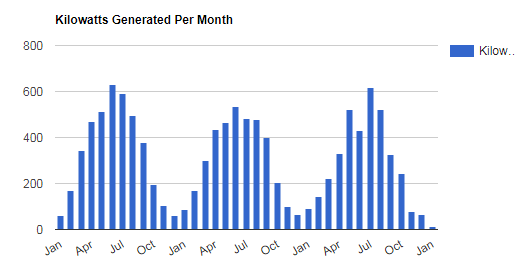 A long stretch of sunny weather in the summer helped me beat 2016, even though the other seasons seemed cloudier than normal.

I had originally penciled out a 6 year payback when I made the decision to move forward with this plan.  Now that I have a better feel for my annual production, assuming the production credits stay above 40 cents thru 2023, I think I can achieve an 8 year payback, recouping by investment by the end of 2023.  Of course that 40 cent number is probably optimistic, though I am hoping the production incentive credits do get grandfathered for those of us that took the risk early.  And the fact that it seems every year I stretch my estimated payback a year, doesn’t give me a lot of confidence yet in this estimate.   At any rate, I was pleased to see no significant drop in solar power production as the panels aged a year, so that is a promising sign.

Regarding maintenance, I have settled in to a pretty comfortable schedule.  In the spring as the days start to get longer and the weather better  – usually May’ish, I give the panels a good cleaning with a sponge mop and a squeegee.  I may clean them a couple months later if we have a heavy pollen outbreak that coats the panels in pollen.  But for the most part I can occasionally just spray them with a hose from the ground.  The panels are very little maintenance in the winter, as the production is so low it doesnt really matter if they are clean or not, and we get so much heavy rain that it keeps them pretty clean.

Being the power geek that I am, I also updated my power usage report for the year.  My total household usage for the year was the lowest on record (well… since 2015).  Usage was down 7% after being up 4% in 2016.  A couple theories on why.  I have continued to replace bulbs with LEDs as they burn out, we had a very moderate summer requiring very little air conditioning, and we were also out of town on vacation a few more weeks last year than previous years.  I also added more lights to my Wink Hub, which I think managed my outdoor lights more efficiently.  For 2017, I don’t have as many vacations planned, but I plan to continue adding LED lights, as well as possibly hook up my furnace to the wink hub to better manage when the heat is on.  Overall, I am guessing the vacations had the biggest impact, so I would guess my power usage for 2018 will increase slightly.

My long term plan has always been to upgrade my panels once I have my investment back.  However, if the panels continue to perform, there is likely no reason to.  Interestingly, on Amazon, the price of solar panels has not dropped over the last year, in fact they have gone up slightly.  I would look to see that change in 2018 though as there are more advanced solar panels that should be coming online this year.  On a related note, Consumer Reports did an interesting payback analysis on Tesla’s solar roof – it appeared to be pretty encouraging.

Overall, still happy with my investment, and I still think residential solar / utility scale wind and solar is the power model of the future.