After a long holding period,  I finally dropped Starbucks out of the VFS Invest portflolio.  Even though  I had to take a capital gain,  I decided to remove it because of two reasons.  One, given its recent drop on earnings concerns, my momentum model flagged it as under-perform.   Two, my thesis for holding Starbucks is crumbling.  My main reasons for holding Starbucks was strong management in Howard Schultz, and a good China play.  Well, with Schultz leaving, that strikes one reason, as well as introduces another negative I watch.  My gut has told me over the years that when a CEO leaves, the stock under-performs for awhile. This may be because the CEO always likes to leave on a high note.  Alternatively, this could be because of the turmoil a change in leadership at the top can cause subsequent quarters to underachieve, because of writeoff’s or change in direction of new management.

The second concern is China.  I still think China is a huge opportunity for Starbucks long term.  Short term,  I have a concern about China’s economic performance overall.  Given the tariffs and slowing growth in China, I think its conceivable that the long predicted China crash could happen in the next several months, and I would think Starbucks could get hit by this. 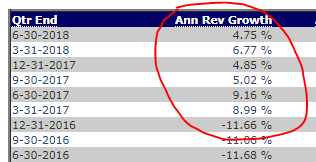 So for now, I am on the sidelines with Starbucks.  I just don’t like the risk/reward.  I hate selling after a big drop, but I also hate holding a stock because I hope it will go back up.  I will watch and wait on the China story, as well as give the new management a couple quarters to prove to me that the leadership is still high quality.